In this tutorial notebook, we will build a Kubeflow Pipeline which will process the Modis Snow Product over the previous 5 to 8 days (depending on user input) and return the visualization of the NDSI Average in British Columbia, Canada.

The main steps for creating the Daily NDSI Average Pipeline:

All these steps for this tutorial will be separated into pipeline components, based on Python functions we will implement.

First, run the following command to install all the packages and dependencies required for this tutorial. The requirements.txt file contains the Python CMR API for data querying, and the Kubeflow Pipelines SDK and lxml (a Python library which allows for easy handling of XML and HTML files, and can also be used for web scraping).

To create a pipeline, we must first connect to GEOAnalytics’ Kubeflow Pipeline Client. Please run the cell below and enter your GEOAnalytics username and password to authenticate the client.

Now, before we can move forward to building our functions, make sure you have an existing NASA EarthData account. We require authentication for retrieving the MODIS data in this example. If you do not have an EarthData account yet, you can create it for free here: https://urs.earthdata.nasa.gov/home

Then, enter in your username and password in the cell input below.

Once we have our authentications ready, let’s move on and create the functions. The python functions will implement the steps for the working pipeline, which will be converted to components using the kfp.components.create_component_from_func(<python function>, <base image>). The custom Docker image, stored at ‘registry.geoanalytics.ca/examples/modis-ndsi’, is already created with all the necessary packages and files installed, ready for you to use.

The first step of the process to to collect information about the data we want. Given the number of most recent days and an area of interest, the function must output a list of granules URLs.

The function create_mosaics() combines the two steps of thresholding the NDSI of each granule, and combining same date granules together.

The inputs of this function are the sublist of urls of the same date, EarthData credentials, the polygon of British Columbia, and the path to our GEOAnalytics bucket where our generated mosaics will stored.

We will be using the MOD10A Version 6 Product which included the computed NDSI Snow Cover values. The NDSI formula is the normalized difference between highly Visible (VIR) and Shortwave Infrared (SWIR) bands. We will need to threshold to make sure to separate the snow-covered pixels from no-snow pixels. Pixels with values between 20 and 100 are considered Snow Pixels.

Once the mosaics for all the dates are created, the next step will require a function which stacks these mosaics and calculates the average NDSI value of the mosaics. The GCS path will be passed in as input, pointing to where all the mosaics are stored.

Once the mosaics for all the dates are created, the next step will require a function which stacks these mosaics and calculates the average NDSI value of the mosaics. The GCS path will be passed in as input, pointing to where all the mosaics are stored.

Pipeline Output Artifact: The Kubeflow Pipelines UI provides built-in support for many types of visualizations. The current available Output Viewers are Confusion matrix, Markdown, ROC curve, Table, TensorBoard, and Web app. For our example, we want to output a final Raster image using matplotlib, so the output viewers we can use are Markdown or Web app. These will allow us to pass in static HTML code that can be displayed in the Output Artifacts.

Since our pipeline stores the files we’ve created for today and this is a Daily NDSI Average Pipeline, it is unnecessary to keep the data once we have the final result. The function delete_files() will permanently remove the folder for today’s date containing all the data stored in the GEOAnalytic’s Google Cloud bucket.

Once we have our components ready, the next step is to put them together in a pipeline. The Daily NDSI Pipeline will take the arguments for the number of days you want an average over, your EarthData username and password, the path to the polygon shapefile (this file is already downloaded in the base image), and the GCS path where files will be stored.

Now there are two important variables to notice:

Applying these operators to the components will allow the pipeline to run smoothly. We will also set the CPI request at 3.5 and memory request at 11,000 MB to enforce operations running on individual pods.

Let’s compile the pipeline with the name “Average NDSI Pipeline!”

The arguments we will pass in below are to be used for the Run. The username and password will be what you entered above in Section 1, and you can modify the days parameter to any reasonable integer. The polygon and gcs_paths should stay the same as they are hardcoded for this tutorial example.

Head over to the Kubeflow Pipeline UI and take a look at the Run you created. Once finished, the pipeline graph should look like this image below. 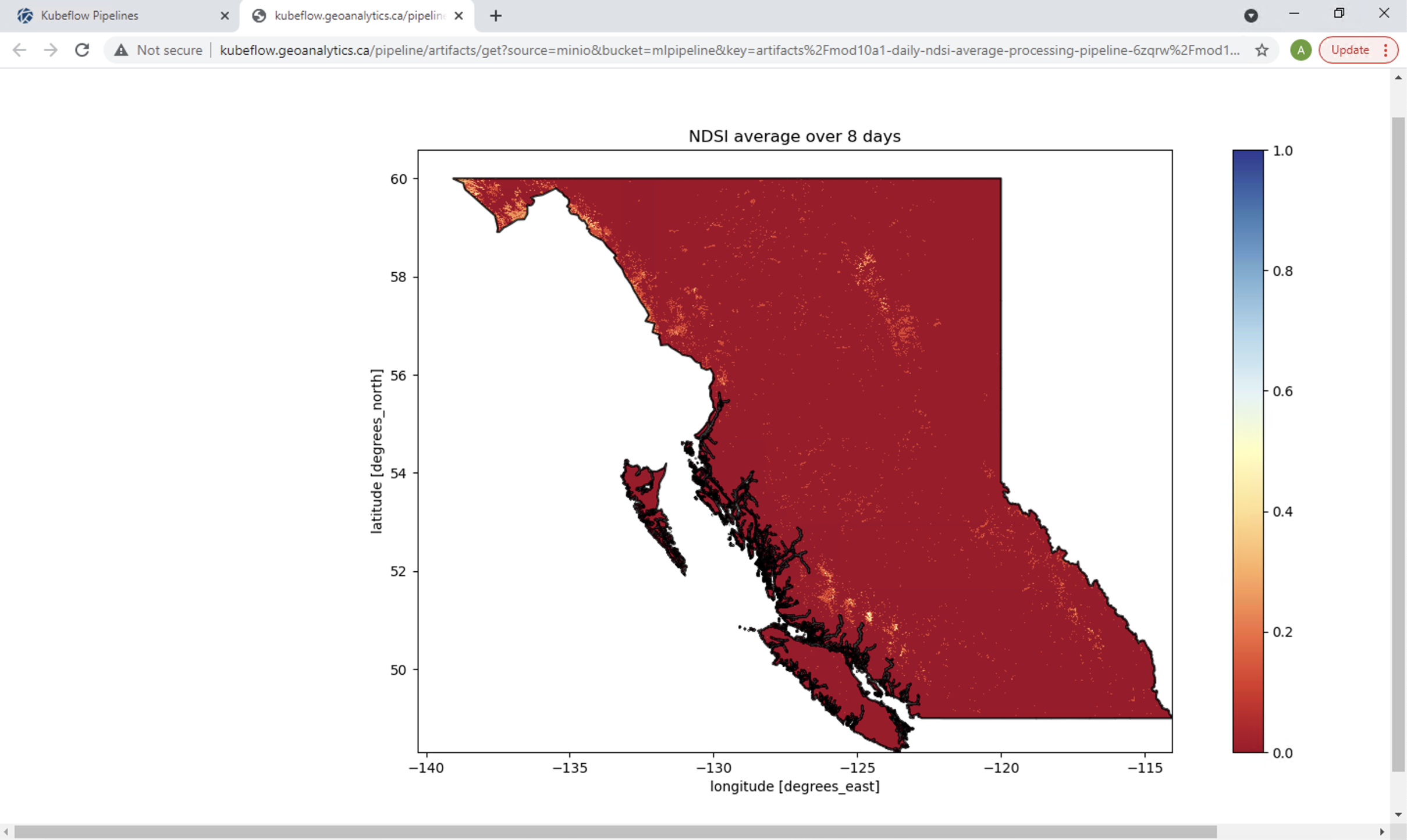 For additional information take a look at these resources: